THE IMPORTANT THING> I have over 20 years experience in the paddling world.

FROM the BEGINNING> I was born and raised in Columbus Ohio by 2 athletic parents. Mom was a fantastic amateur tennis player and 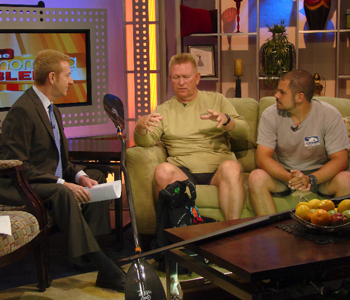 Dad after World War 2 stopped his baseball career  had an A.S.A Hall of Fame Ohio Fastpitch Softball career. When he wasn’t playing, Dad would drag me along to watch fastpitch games. He would even keep score at the lady fastpitch games and back then not many women played ball but they were fantastic athletes. Today I’m glad the ladies are keeping the game alive.

After I washed out in baseball it was natural for me to leap into fastpitch. I too was fortunate enough to have an A.S.A Hall of Fame career. Dad and I were the first father and son inducted into HOF.

I have been an entrepreneur my entire life. Then I moved to Naples Florida and quite frankly was bored out of my mind sitting on the beach. My wife Donna and I started 2 small businesses and one day I am sitting on the beach and a man put a very small kayak on the glassy water of the Gulf of Mexico and paddled away. I remember saying to myself “That’ll do” and that week I owned my first recreational sit-on-top kayak. All I wanted to do was relax, paddle and look at birdies. The next thing I know I am paddling on long excursions. Then I started building sea kayaks and designing sea kayaks with a good friend. I have paddled and camped a large part of the Mississippi River in a skin on frame Greenland style kayak. Being a huge fan of Lewis and Clark I am proud to say I have paddled and camped much of their EXTREME journey on the Missouri River. I have paddled portions of the Ohio River, Arkansas River and paddled in the Atlantic and Florida Straits. Every year I take my “Trip to Nowhere”. I put a sea kayak on my Jeep and head north with no particular destination or time frame.

I am founder and President of the Paradise Coast Paddlers Club. The club is dedicated to kayaking safety and education (and fun).

I am a member of the Diana Nyad XTREME DREAM TEAM. I was with Diana on two unsuccessful attempts to swim from Havana to Key West and was fortunate enough to be with her on the XTREMEly successful world record swim in 2013 across the Florida Straits. One of my jobs was to paddle a kayak next to Diana and keep sharks away.

I have been paddling for 20 plus years, teaching kayaking and leading club trips for 15 plus years.

Now I am so happy to pass on the kayaking and Eco knowledge and stories I have acquired over the past 20 plus years.

I do hope you will join me for a fun day on the water!